They have smeared Labour leaders before, but this cold war hysteria is part of a bid to strip away Corbyn’s democratic legitimacy

In that tumultuous summer of 2015, when Jeremy Corbyn was transformed from “obscure backbench MP with more chance of winning X Factor than becoming Labour leader” to leader-in-waiting, his opponents issued a solemn warning. Conservative Central Headquarters, it was said, had a dossier the size of Canada detailing his links to all sorts of unsavoury, dubious, anti-British individuals, groups and regimes. In a general election campaign, the full arsenal of the “Corbyn Hates Britain” files would be deployed by the media, leaving Labour’s electoral prospects an irradiated wasteland.

Related: The worst view to take on Corbyn’s Czech connection is: ‘Who cares?’ | Matthew d’Ancona

Equity markets are down – is this a correction or a signal that the long-term economic growth phase is coming to an end? 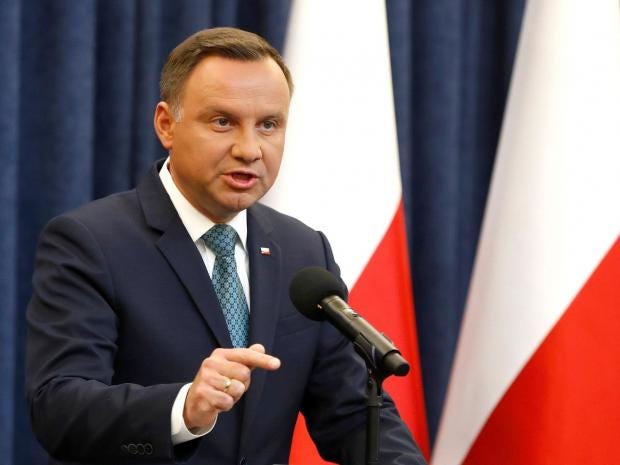 The Israelis have been mighty pissed off with the Polish government these past few days. I don’t blame them.

Like the history of electricity generation, data processing has become centralised, so shouldn’t it be regulated in the same way?

Ten years ago, the tech commentator Nicholas Carr published The Big Switch: Rewiring the World From Edison to Google. It was the first attempt to explain to a general audience the significance of the computing industry’s move to what became known as “cloud computing”.

In the book, Carr sketched an analogy between the building of the electric grid a century earlier and the move to cloud computing that was already well under way in 2008. Electricity was once generated locally – every factory had its own generator – but eventually it was provided by huge generating stations run by large utility companies and distributed through a national network: the grid. The same process, Carr argued, would happen (indeed, was happening) to data processing. Instead of being done locally – in the server-rooms of individual organisations – it would be done in huge server farms and the results distributed through a national (now international) network: the internet.

Related: Nicholas Carr: ‘Are we becoming too reliant on computers?’

It’s no surprise that home ownership for young adults has collapsed. It’s the left alone that offers policies that will help

Neoliberalism is a con, a fraud, and Britain’s housing crisis vividly illustrates why. The populist promise of neoliberalism has always been about extending choice for the individual. In a properly functioning society – which sadly we do not have – young Britons would be able to choose between a comfortable council house on a secure tenancy, a privately rented home with an affordable rent and security, and home ownership. All of these options have been trashed.

Hundreds of thousands languish on social housing waiting lists because new stock isn’t being built. An unregulated private rented sector means both rip-off rents and a lack of security, depriving tenants of the ability to set down roots in communities. And as new research from the Institute for Fiscal Studies demonstrates, home ownership for middle-income young adults has more than halved in just two decades.

What freedom for an individual whose pay packet is devoured by rent and who lacks security?

Americans' insistence about their right to guns is tied in with their Christian belief system. As we all know, when Jesus was asked what he would do if someone slapped him on his right cheek, he responded: 'Load my A15 semi-automatic rifle and fire at random strangers in a shopping centre in Nazareth'

In Britain’s parlous situation, asking the top 5% of earners to pay more is far from unreasonable

When Labour unveiled its tax plans in last year’s general election, the media howls were as hysterical as they were predictable. Asking the top 5% of earners to pay a bit more was, in the Telegraph’s words, a £50bn raid on the middle classes. Here was a “hard-left socialist blueprint”, frothed the Sun, while the Daily Mail seethed over Jeremy Corbyn’s “class war manifesto”. The truth, though, is this: Labour’s tax plan is not only moderate, it is too moderate to meet the growing series of challenges facing British society.

Labour’s proposals – a 50% rate of tax for income over £123,000 and 45% for earnings above £80,000 – hardly signify bolshevism on a rampage. Indeed, by the standards of recent history, they are weak beer. The average top rate of tax between 1932 and 1980 was 81% , and under Ted Heath’s Tory government in the 1970s the top rate was 75%, with an additional 15% investment surcharge to boot. Margaret Thatcher might have slashed the top rate, but it remained at 60% until the last two years of her reign.

Related: Tax on test: do Britons pay more than most?

She's the scion of one of Italy's most fashionable dynasties, calls Karl Lagerfeld one of her dearest friends and is in the midst of rapid global expansion. Now she has her eyes set on London, as Laura Craik discovers when given a rare audience with Silvia Venturini Fendi…

Eco-friendly fashion might have a worthy reputation, but a new generation of pioneers is set to change that. And not a moment too soon, says Laura Craik