Will investors support bitcoin to continue? The trouble is that we don’t know who owns it. A huge amount of energy has gone into uncovering ownership but most names remain concealed

At a time when it is fashionable to assert the European right and extreme right are on an unstoppable ascension to power it is useful to look at Greece where a socialist government, headed by a populist ex-firebrand, now turned well, almost a statesman, has just put on a tie.

Every now and again, a minor celebrity or institution will announce that they are “challenging themselves” to “be poor for a day” in order to raise awareness of the plight of people living in poverty in the UK.

The US policy of separating children from parents entering the country without permission was rightly met with global outrage.

Last week, the world looked on with horror as the Trump administration implemented its “zero tolerance” policy that separated parents from their children at our borders.

“It’s getting tickly now,” Alex Ferguson famously observed during a title run-in. “Squeaky bum time, I call it.” This was in 2003, seven years after arguably the definitive Premier League bum-squeak. 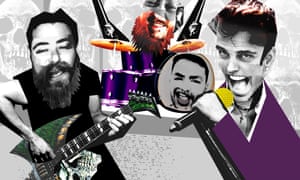 As a new supergroup, it came out of the blue – and is all the more musically historic for it. On Tuesday, Neil Hamilton took to the internet with an announcement: “I’d like to welcome @PrisonPlanet, Sargon of Akkad, @CountDankulaTV and Milo Yiannopoulos to UKIP.” Wow.

EU leaders were responsible for the so-called refugee crisis in 2015. This deal does nothing to end the misery

Europe isn’t suffering from a migration crisis: it’s afflicted by a humanitarian crisis. But to Europe’s leaders, refugees and migrants are not human beings, they’re statistics, or fodder for hateful political campaigns for charlatans to rise to high office.

Amid all the wrangling over an EU deal on migration, you’d think the number of refugees and migrants entering Europe was surging: it’s not. While over a million arrived on European shores in 2015, last year it was only 172,362; this year, fewer than 43,000 so far. But the real figure that matters is 12,397. That’s the number of recorded deaths between January 2014 and February 2017 of children, pensioners, men and women who spent their last minutes writhing in the sea as the Mediterranean’s waters entered their lungs. And responsibility for these deaths lie squarely with the European leadership.

Related: EU migration deal: what was agreed and will it work?

Gradually the myth of natural dominance has been replaced by a more realistic sense of where we are, and a national mood of ‘bloody hell, we’ve beaten Tunisia, how have we managed that?’