So far, so good. But the whole idea of an hourly wage assumes that people are employed by someone else. Now 15 per cent of the workforce employ themselves

Since the 1960s, one of the key developments in making cars safer has been the idea of a “crumple zone”, a part of the vehicle (usually the front) that is designed to absorb the energy from a collision by controlled deformation, ie crumpling. By doing this, the zone protects the most important part of the car – the cell containing the driver and passengers. (If you doubt the effectiveness of crumple zones, by the way, a video made some years ago by the Fifth Gear TV programme makes interesting viewing.)

As the world moves to vehicles that drive themselves, our roads are likely to become safer because most road accidents are caused by driver error. That, at any rate, is the standard spiel of evangelists for autonomous vehicles. There will, they say, be many fewer collisions and therefore less carnage on our roads. Crumple zones will become less necessary, though autonomous vehicles will continue to need them.

It was, in reality, inevitable that Operation Sophia, the European Union’s humanitarian policy of rescuing refugees from death by drowning, would soon come to an end.

A fierce battle has been raging for some time in the kingdom of corporate behemoths. Last year, billionaire Jeff Bezos seemed to be the reigning monarch, occupying the throne with his tightening grip on the world of retail, entertainment and – increasingly – finance.

Now is the chance to remove the main source of Britain’s worst crisis since the war: Conservative rule

Force-feed them back their words. Theresa May’s deal was “even worse” than staying in the EU, declared Dominic Raab, the Brexit secretary who resigned to oppose a deal he helped negotiate. This is a man who once publicly confessed he didn’t understand Britain’s reliance on the Dover-Calais crossing.

The deal would turn Britain into a “vassal state”, declared Boris Johnson, a man who had penned a column backing remain days before, endorsing leave; it was “about as bad as it could possibly be”.

Tory peer Sayeeda Warsi is one the most outspoken critics of Islamophobia in her own party. She talks to Owen Jones about ‘Britain’s bigotry blind spot’ and the consequences it has for Muslim communities around the country, describes how an anti-Muslim narrative fuels violence and shares her concerns about how complaints are dealt with in the Tory party

As Boris preaches and the Grand Wizards of the ERG cast spells of disaster on Britain’s embattled prime minister, perpetual chaos continues. But beyond the Westminster soap opera, the national mood is changing

When it comes to the threat of Islamist terrorism, no one doubts the role of radicalisation. The internet, hate preachers such as Anjem Choudary and Abu Hamza, and the western-armed, extremism-exporting state of Saudi Arabia: all play their part in radicalising the impressionable. When it comes to the far right, however, this consensus is absent. The reason for this is as obvious as it is chilling: the hate preachers, recruiting sergeants and useful idiots of rightwing extremism are located in the heart of the British, European and American establishments. They are members of the political and media elite.

Less than two weeks ago, dozens of Muslims were murdered in Christchurch. Before the lethal rampage, the shooter is said to have inscribed “For Rotherham” on one of his gun magazines – in reference to the English town’s grooming scandal. In Britain, far-right terrorist attackers have ranged from David Copeland, who detonated a nail-bomb in a Soho gay pub in 1999 after decades of media hatemongering against LGBT people, to the murderer of Jo Cox, whose despicable act was cheered by 25,000 people online, to Darren Osborne, who ploughed his van into worshippers outside a mosque. As one radicalisation expert, Abdul-Azim Ahmed, of the Centre for the Study of Islam in the UK at Cardiff University told ITV news, Osborne’s extremism “also came from the mainstream media. It came from mainstream politicians both here and abroad.” 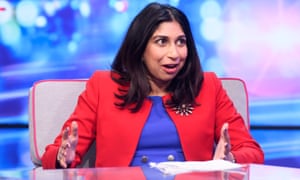 The previous day’s exertions had rather taken it out of everyone.