We like to take the Big Boys on trust. No longer do we believe in our meretricious little leaders with their easy lies and twitters: the Trumps and Mays and now all the nationalists of Europe. We certainly don’t put any credit in Arab dictators.

Could Tesla owners one day farm out their cars as self-driving taxis?

You don’t have to be a psychiatrist to wonder if Elon Musk, the founder of Tesla, is off his rocker. I mean to say, how many leaders of US public companies get into trouble with the US Securities and Exchange Commission for falsely claiming that they have secured funding to take their company private at $420 a share – and then get sued and fined $40m? Or can you imagine another CEO who deals with Wall Street analysts by swatting away questions about his company’s capital requirements as if they were flies. “Excuse me. Next. Next,” he replied to one guy who was pressing him on the subject. “Boring, bonehead questions are not cool. Next?”

The view from Wall Street is that Musk is too volatile to be in charge of a big and potentially important public company. The charitable view is less judgemental: it is that, while he may have a short fuse, he’s also a gifted, visionary disrupter. But even those who take this tolerant view were taken aback when he declared at a recent public event that he could see “one million robo-taxis on the roads by 2020”.

Owners might be able to earn $30,000 in gross revenue a year from their cars

Owen Jones asks people attending a Brexit party rally in London’s Olympia why they are turning up, what they think of Nigel Farage and what their rise tells us about modern politics 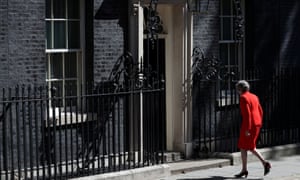 Eyes down, ye players of apocalypse bingo, as we move beyond a European elections campaign where we learned that milkshakes are “political violence” and rape threats are “satire”.

Deceit and dishonesty were hallmarks of her doomed reign. From her Brexit dealings to the Windrush scandal, she has failed

Spare me the inevitable pity for Theresa May after her tearful farewell address this morning. “Oh, wasn’t she given such a terrible hand!”, people might cry, or “is it her fault that her backbenchers are such a bunch of Neanderthal extremists?”, and “it’s not her fault Brexit is such an undeliverable mess, is it?”. We must see through this. May is the worst prime minister – on their own terms – since Lord North’s reign in the late 18th century, when the US colonies declared their independence.

May did indeed inherit a terrible hand. She then proceeded to douse it liberally with petrol and set it alight.

So successful has she been, that having been 20 points ahead in the polls in 2017, her party now looks likely to win a quarter of the votes of a party boasting they’ll make us poorer until 2050

Plus, don’t knock people’s dress sense or worry about which wine you order

From M&S’s LGBT sandwich to Kendall Jenner stopping a riot with a Pepsi can, corporate business is adept at adopting our concerns. But is it all a cynical marketing ploy?

Imagine getting angry over a sandwich. When Marks & Spencer launched its LGBT sandwich – basically, your classic BLT with some gay guacamole thrown in – I, along with a list of other LGBTQ commentators, was asked by ITV’s This Morning if I was offended by the sandwich. I wasn’t, and neither were any of the others they asked, so this fixture of daytime television settled on a former associate of David Icke, who proceeded to rant about trans people. How did we arrive at a point where sandwich packaging is debated on daytime TV?

Brands are increasingly flirting with the realm of politics. This week, Lacoste announced it would swap its trademark crocodile logo for 10 limited-edition polo shirts featuring a different endangered species instead; it was soon pointed out that the company was offering “gloves made from deer leather” and “cow leather handbags” online. When police asked McDonald’s to stop selling milkshakes in Edinburgh during a visit by Nigel Farage – following the “milkshaking” of far-right activists – Burger King cheekily announced to the “people of Scotland” that they were “selling milkshakes all weekend”. But has this fast food giant really joined the anti-fascist resistance?

Like Margaret Thatcher, this government thinks poverty is a personality defect rather than a result of its policies

How did Britain in 2019 – one of the wealthiest societies that has ever existed – end up being damned by a United Nations report for condemning the poor to lives that are “solitary, poor, nasty, brutish and short”? These are the words of the 17th-century philosopher Thomas Hobbes; another British literary great conjured up by Prof Philip Alston – the UN’s special rapporteur on extreme poverty and human rights, and a bete noir of our crumbling government – is Charles Dickens and his vivid description of the 19th-century workhouse now being brought back in “a digital and sanitised version”.

The government, he contended, was guilty of the “systematic immiseration of a significant part of the British population”, and that “much of the glue that has held British society together since the second world war has been deliberately removed and replaced with a harsh and uncaring ethos”.

Related: Capitalism used to promise a better future. Can it still do that? | Richard Reeves

Labour cannot bring the country together with any kind of deal because a large majority will always hate the deal they have done. Most people think about Brexit as a binary divide. While true in terms of Remaining or Leaving, this framework is misleading when thinking about any Brexit deal.

moonblogsfromsyb
Create a free website or blog at WordPress.com.