Glastonbury – Idles – Live at GlastonburyContains very strong language and flashing images.Get ready for the pure rock and reckless abandon that is IDLES.

“I am delighted to announce the introduction of the universal credit,” said Iain Duncan Smith at the Conservative Party conference on 5 October 2010. “[It] will, I believe, restore fairness and simplicity to a complex, outdated and wildly expensive benefits system.

Some background for non-UK readers. The contest for the next leader of the Conservative party, and therefore our next Prime Minister, is now between two: Boris Johnson and someone else. Johnson is the clear favourite to win.

Brexit could be a gift to Labour that will keep on giving, if the Labour leader is able to grasp it One of the sentences you are sure to hear nowadays is: “Brexit is not going to go away anytime soon”. It is true because Conservative party members will not let it go away.

New studies show that the latest wave of automation will make the world’s poor poorer. But big tech will be even richer

So the robots are coming for our jobs, are they? Yawn. That’s such an old story. Goes back to Elizabeth I and the stocking frame, if my memory serves me right. Machines have been taking our jobs forever. But economists, despite their reputation as practitioners of the “dismal science”, have always been upbeat about that. Sure, machines destroy jobs, they say. But hey, the new industries that new technology enables create even more new jobs. Granted, there may be a bit of “disruption” between destruction and creation, but that’s just capitalist business as usual. Besides, it’s progress, innit?

We have now lived through what one might call Automation 1.0. The paradigmatic example is car manufacturing. Henry Ford’s production line metamorphosed into Toyota’s “lean machine” and thence to the point where few humans, if any, are visible on an assembly line. Once upon a time, the car industry employed hundreds of thousands of people. We called them blue-collar workers. Now it employs far fewer. The robots did indeed take their jobs. In some cases, those made redundant found other employment, but many didn’t. And sometimes their communities were devastated as a result. But GDP went up, nevertheless, so economists were happy.

Kai Strittmatter is a German journalist who writes for Süddeutsche Zeitung and is currently based in Copenhagen. From 1997 until recently, he had been a foreign correspondent in Beijing. Prior to those postings, he had studied sinology and journalism in Munich, Xi’an and Taipei. So he knows China rather well. Having read his remarkable book, it’s reasonable to assume that he will not be passing through any Chinese airport in the foreseeable future. Doing so would not be good for his health, not to mention his freedom.

We Have Been Harmonised is the most accessible and best informed account we have had to date of China’s transition from what scholars such as Rebecca MacKinnon used to call “networked authoritarianism” to what is now a form of networked totalitarianism. The difference is not merely semantic. An authoritarian regime is relatively limited in its objectives: there may be elections, but they are generally carefully managed; individual freedoms are subordinate to the state; there is no constitutional accountability and no rule of law in any meaningful sense.

The more one reads, the more pressing one conclusion becomes: almost everything we thought we knew about China is wrong

Related: China wants us to forget the horrors of Tiananmen as it rewrites its history | Louisa Lim and Ilaria Maria Sala

Last year, I investigated the harsh realities of poverty in the UK.

The word “democracy” is always seen positively. When I heard the term “party democracy” with regard to my own party, the Conservatives, it sounded like something to be welcomed. 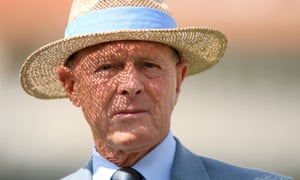 My God, I wish Geoff Boycott had approached playing cricket like he approaches no-deal Brexit.

If I might just borrow the argot of our pending prime minister for a minute, it really is incredible how much political capital Labour has spaffed on this guy. On Thursday, the previously suspended MP for Derby slithered back into Labour via a haunted mirror. Forgive me, via the decision of a three-person NEC panel that included perma-disgrace Keith Vaz, who judged Williamson’s long history of highly problematic statements wasn’t antisemitic.