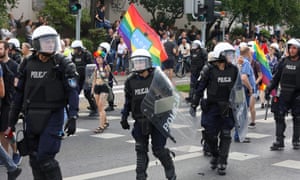 We set off from the Arsenal gallery in a small group of about 20 people, first through Białystok’s Branicki Palace gardens, where a “family picnic” is in full swing, organised by the Law and Justice party local authorities as a contrast to the Pride march.

Many believe the Jewish Holocaust was planned by the Nazis at a Berlin lakeside villa at Wannsee on 20 January 1942. Most historians still think the Armenian Holocaust was hatched up by the Ottoman Turks in Istanbul in 1915.

Skulking in the background of TV news footage of Boris Johnson’s cabinet of C-list politicos, a strange figure in a T-shirt could be seen. His name: Dominic Cummings, now the prime minister’s senior adviser. He’s all forehead and no smile, clutching a pen and possibly a notebook, and doubtless making notes.

What a pity, one thought, that David Davis wasn’t round the cabinet table. In 2017 Cummings noted that Davis was as “thick as mince”, as “lazy as a toad” and as “vain as Narcissus”. As they passed him in the corridor on Thursday, many of Johnson’s new appointees must have wondered how they will be summarised in that notebook. We’ll have to wait a bit to find out.

When even Microsoft starts calling for government regulation, you know the technology is a problem

On 18 July, the House of Commons select committee on science and technology published an assessment of the work of the biometrics commissioner and the forensic science regulator. My guess is that most citizens have never heard of these two public servants, which is a pity because what they do is important for the maintenance of justice and the protection of liberty and human rights.

The current biometrics commissioner is Prof Paul Wiles. His role is to keep under review the retention and use by the police of biometric material. This used to be just about DNA samples and custody images, but digital technology promises to increase his workload significantly. “It is now seven years,” observes the Commons committee, “since the 2012 high court ruled that the indefinite retention of innocent people’s custody images was unlawful and yet the practice is continuing. A system was meant to have been put in place where any custody images were kept for six years and then reviewed. Custody images of unconvicted individuals at that point should be weeded and deleted.”

Police forces are fascinated by it, not least because it provides them with ‘objective’ grounds for stop and search

The duplicitous prime minister hasn’t just changed the rules, he’s playing a different game. It’s time for us to learn it and beat him at it

The words would melt a heart of stone – save for those of the Gestapo torturers upstairs. The prisoners wrote their stories, their poems, their last pre-execution laments on the walls of their cells – which you can still read in the basement of the old Nazi secret police headquarters in Cologne.

The tech giant now seems to imagine itself a state. Its reach must not go unchallenged

Now that Wimbledon is over, if you’re looking for something interesting to watch, can I suggest heading over to the video of last week’s interrogation by the US Senate committee on banking, housing and urban affairs of Facebook’s David Marcus? Given the astonishing incompetence of the Senate’s inquisition of Marcus’s boss, Mark Zuckerberg, some time ago, my hopes for last week’s hearing were not high. How wrong can you be?

But first a bit of background might be helpful. Facebook, currently the tech world’s most toxic company, has decided to get into the currency business. It proposes to launch a new global cryptocurrency called Libra. Marcus is the guy leading this project. He formerly worked at PayPal and then moved to Facebook, where he ran the company’s Messenger service.

I anticipated that my last post would not be popular in many circles. I want to respond to some of the common themes from the responses in this post, but there was one reaction I was not expecting. First some background.

Corbyn may not be a great or even a particularly good leader, but it seems few in the media recognise he is the only viable opposition to the far right we have.

Here’s a full list of the disgraceful anti-democratic MPs who voted against stopping the ‘proroguing’ of parliament.